On the airfield perimeter, across from crash gate 2.

There is a museum nearby, but a visit MUST, MUST, MUST be booked, and it must be on one of their open days. Information can be found at Wattisham Airfield Museum 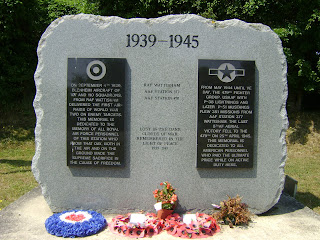 On September 4th 1939, Blenheim aircraft of 107 and 110 Squadrons, from RAF Wattisham delivered the first air raids of World War Two on enemy targets. This memorial is dedicated to the memory of all Royal Air Force personnel of this station who from that day, both in the air and on he ground made the supreme sacrifice in the cause of freedom.

From May 1944 until VE Day, the 479th Fighter Group, USAAF with P-38 Lightnings and later P-51 Mustangs flew 351 Missions from AAF Station 377 Wattisham. The last 8th AF aerial victory fell to the 479th on 25th April 1945. This memorial is dedicated to all American personnel who paid the ultimate price while on active duty here.